Medical Bankruptcy That Won’t Go Away

A 2005 academic paper fueled much discussion and helped her political career, but remains contested. 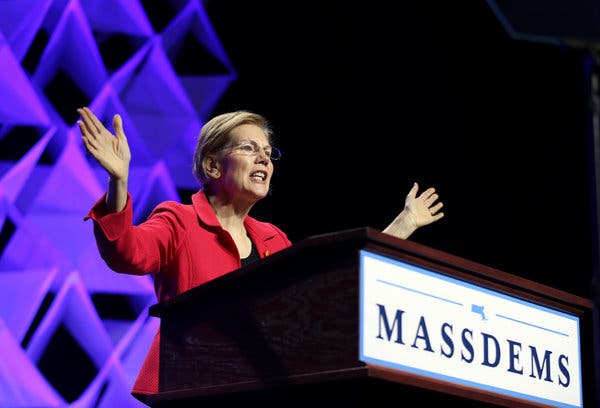 Senator Elizabeth Warren last week at the Massachusetts Democratic Party Convention in Worcester. She ran for the Senate largely on the themes she had explored in her scholarship. Elise Amendola/Associated Press

Elizabeth Warren is still sparring with academics over a paper she published in 2005.

The latest round came on Wednesday, in The New England Journal of Medicine, where she and her co-authors critiqued a recent paper that argued that medical problems cause a much smaller share of personal bankruptcies than many people think.

One of the reasons many people think medical bills cause so many bankruptcies is Elizabeth Warren, now a United States senator and possible Democratic presidential candidate. In 2005, she, along with David Himmelstein, Deborah Thorne and Steffie Woolhandler, published a paperin the journal Health Affairs documenting a memorable statistic: More than 40 percent of all bankruptcies in America were a result of medical problems, they wrote. In 2009, they updated that research with an even more startling number: Medical bills were responsible for more than 62 percent of all American bankruptcies.

Dr. Woolhandler and Dr. Himmelstein are physicians, public health researchers at Hunter College and longtime advocates of a single-payer health care system. Ms. Thorne is a sociologist, now at the University of Idaho, who studies bankruptcy. Ms. Warren was a Harvard law professor longing to bring data to questions that her colleagues often answered with theory.

Their research was important, both among researchers and policymakers. The authors, in their discussion of their findings, emphasized the financial toll that comes with being uninsured or without comprehensive health coverage. Their work was often mentioned by politicians interested in expanding health insurance coverage in the country — particularly Barack Obama, who talked about it on the campaign trail and again when stumping for the Affordable Care Act.